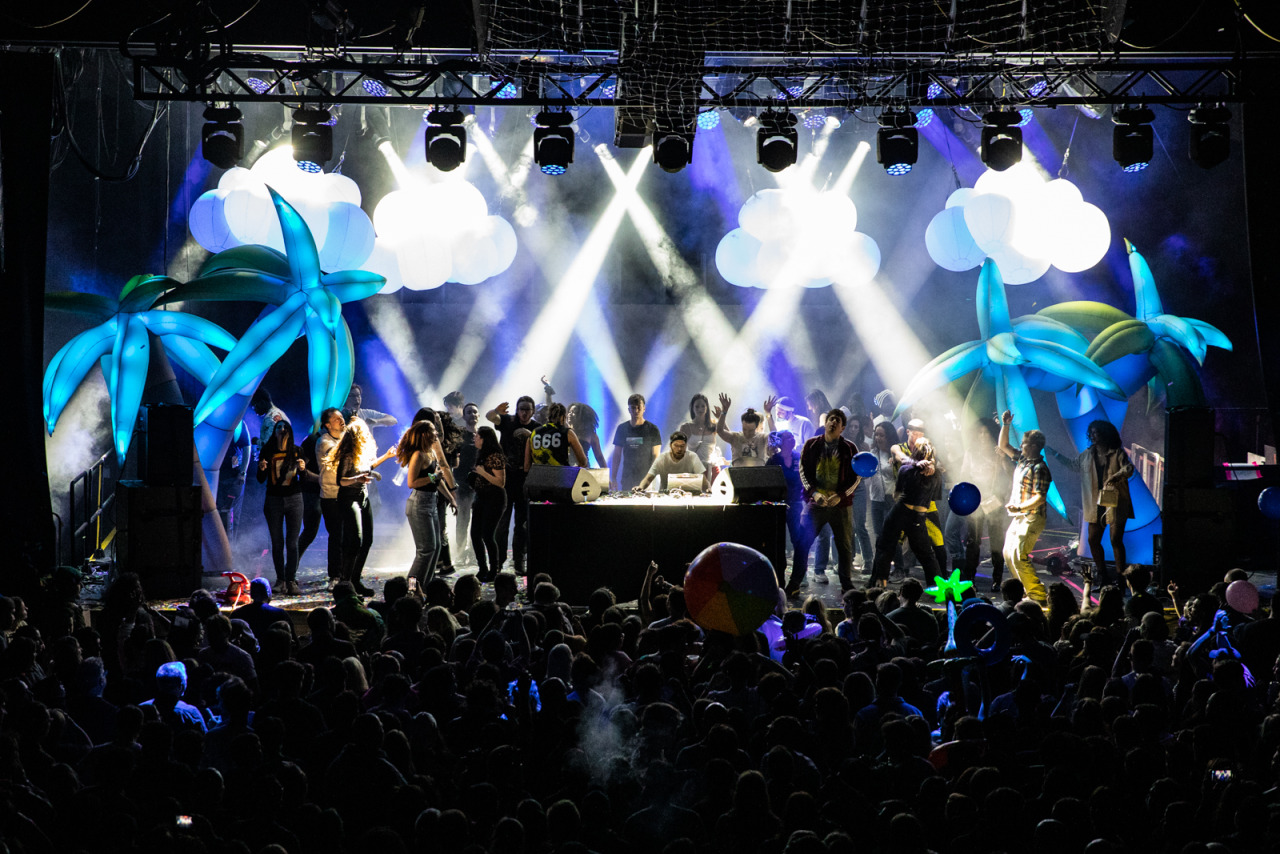 Gregg Gillis sees the connections. More important, he hears them. Even more important, he makes a curious kind of art that takes what he hears in those connections and creates a deeply felt musical experience that also happens to be a raging party. Not bad for two turntables and a mic … well, much more accurately, one twisted genius, a laptop, software and electronics, and an insatiable curiosity for sharing these connections with the world.

As Girl Talk, Gillis has returned after an absence, offering up his first new album in 12 years. But it’s the live experience—the immersion in it—where Girl Talk truly shines, and Gillis was greeted with a hero’s welcome by a very-sold-out Brooklyn Steel Thursday night, cutting it up for 90 minutes of pulse-pounding excitement, sampling, sonic name-checks and furiously competent DJ flow that had everyone in the room spinning, bouncing and getting down. Gillis himself needs no hype person—he was flying, gliding and bopping around the stage immediately, seemingly at full rage from the jump.

That’s the Girl Talk experience, if words can possibly acquit it, and it extends well beyond the raw music. Indie nerds, queer punks, club kids, hip-hop fans, metalheads … IPAs, White Claws, tequila shots … suits and crop tops … beachwear … there’s something for everyone here, not in a pinball-among-genres-and-hope-it-all-works kind of way but in aggressively emphasizing the linking strands among those genres, playing into an ADD culture that indulges polyglot musical consumption and creates impossible displays of choice, coaxing a frisson effect for the listener (and, just as often, the sweaty dancer) when there’s comingling of many different sounds that feel naturally like they could extend out of one another. It’s wild shit, and so much more than what you might think the Girl Talk thing is if you’ve never experienced it—or only had it described to you.

In this world—at least at Brooklyn Steel—Jay-Z verses land over Modern English’s “I Melt with You.” Nicki Minaj turns up with the Cardigans’ “Lovefool.” Madonna’s in there (of course). So is Prince. Lil’ Wayne matches Wilson Pickett. M.O.P. groks Miley Cyrus. Macklemore. The Cure. You get the idea. And that was before the beach balls, wading-pool floaties and giant-worm-like tube balloons came out. Confetti cannons too.

If this were a more academic exercise—a prerecorded DJ or a bunch of looping machines set up to move sonics around—it might still be interesting. What makes it fun, though—and what makes Girl Talk example No. 1 in the face of criticism that a DJ-like live experience isn’t much more than club beats—is Gillis himself, Mr. Personality, calling scores of people up to the stage to boogie, goosing the whole enterprise with a galaxy of balloons, T-shirt cannons, light-up goodies and, hey, clothing coming off. How much of that is what Gillis brings vs. what the crowd brings to a Girl Talk show is beside the point. It all mashes together here, and it all makes perfect sense. Dance yourself clean. —Chad Berndtson | @CBerndtson