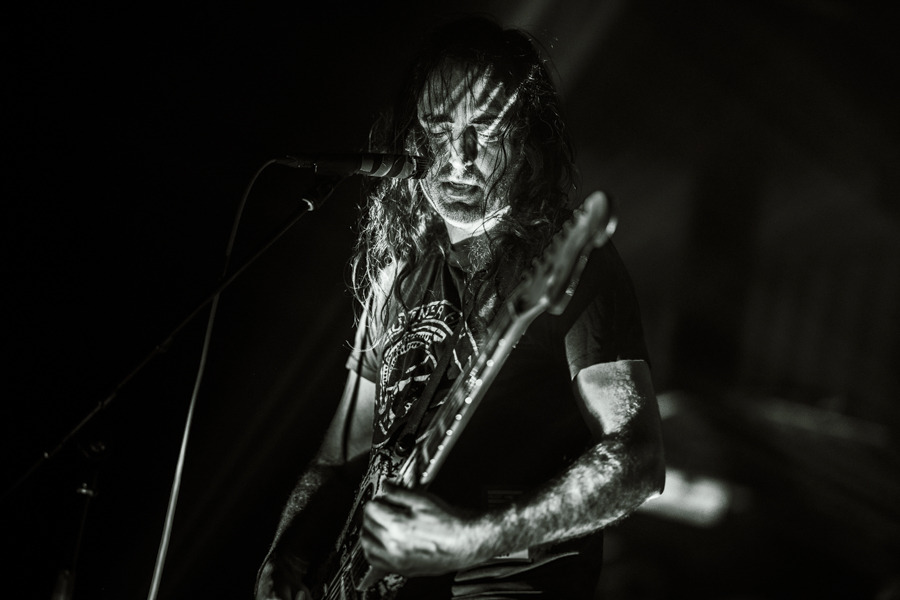 The intersection of noise-rock, post-punk and shoegaze can be a pretty annihilating place: Coursing sonics, punishing volumes, wave after wave of sound, especially in lesser hands just wanting to kick up an artistic-ish racket because, hey, angsty rebellion or howling catharsis ain’t meant to sound soft. But that isn’t A Place to Bury Strangers, which through their nervy, rewarding 2022 album, See Through You — the dominant strain of the band’s roughly dozen-song set on Monday night at Music Hall of Williamsburg — goes right at that same intersection, but deftly finds something that eludes many similar-sounding acts: heart.

The New York City trio is 20 years in, and despite nearly nonstop lineup changes since forming — frontman Oliver Ackermann is the only true mainstay — the band’s never lost a gift for finding swooning melody, even warm romance, at the core of what can otherwise be dark, industrial, nihilistic-feeling music. Their sound is plenty noisy and plenty ominous: The psychedelic patina on A Place to Bury Strangers is not the plasticine porters and marmalade skies variety. But there’s a lot to grab onto, and a sonic palette that soars higher and roams farther than what might otherwise be a typically drone-jangle-crunch-peak-scrape-off kind of mode for this music.

Ackermann seems to have found some of his strongest collaborators in the band’s history in drummer Sandra Fedowitz and bassist John Fedowitz, who officially joined the APTBS lineup in 2021. (Both Fedowitzes are in Ceremony East Coast, which has further roots in Skywave, the ’90s-era shoegaze band Ackermann and John Fedowitz were both part of.) Capping a long, four-act bill at Music Hall, they ripped through much of See Through You, with “Let’s See Each Other,” “Dragged in a Hole” and the scorching “Hold on Tight” as highlights. In every song, they did their face-melting sonic wall return, although it morphed out of (and into) different forms, from the deceptively light boogie that began “End of the Night” to the high-speed theatrics of “I Lived My Life to Stand in the Shadow of Your Heart.” The rhythm section, especially, never faltered; Sandra Fedowitz owned “Have You Ever Been in Love,” whose build began with rat-a-tat drums but instead of surging quickly to screaming peaks, sustained for many minutes in more of a hypnotic, space-rock trance, showing yet another side of how their wall morphs. What’s more, it was bigger than the three of them — a fourth band member was the lights, from the faintest, train-tunnel hints to brain-scrambling strobes. And a fifth band member was the volume: A Place to Bury Strangers aren’t an oooooh but an aaaaaaahhhhhh. And what a peal. —Chad Berndtson | @Cberndtson