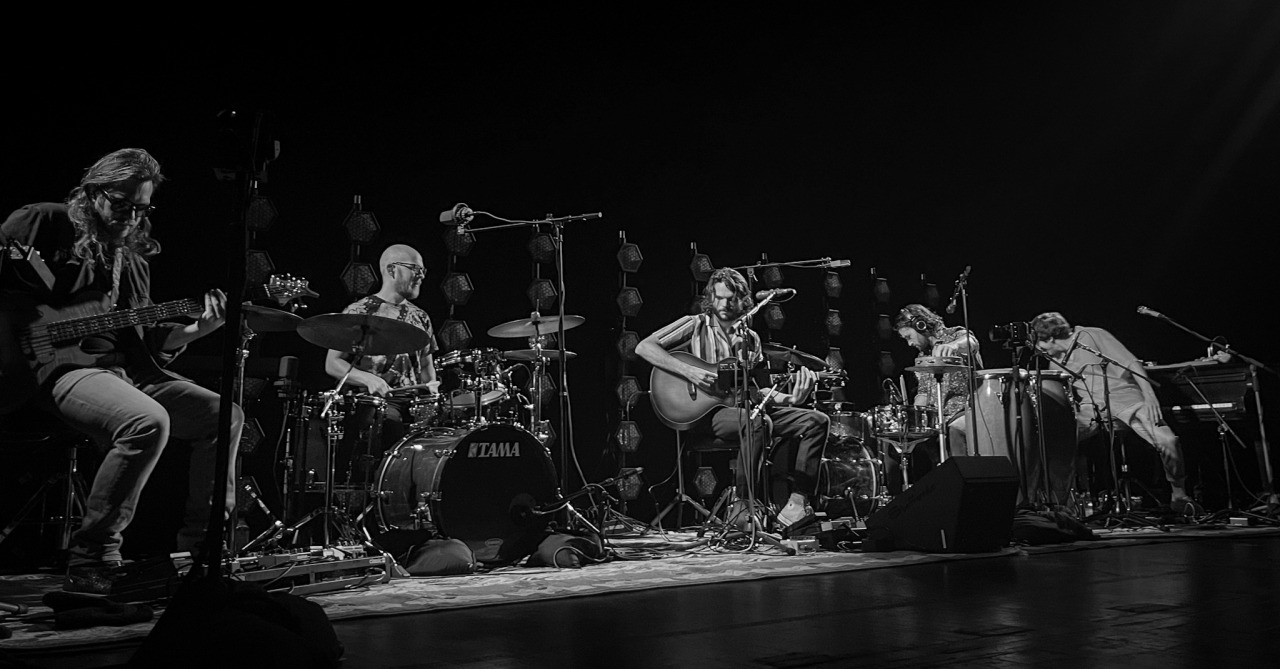 The jam-band thing is remarkably self-renewing. Years (decades!) pass. A new generation forms behind the current vanguard and some of its leading lights join that vanguard, soon turning their attention to help bring up younger bands the same way they once were brought up. Word-of-mouth carries the day. Credibility sticks. Arguments — mostly good-natured among passionate fans — begin and endure. The live-music experience rules.

But even by that standard, the rise of Goose — the Connecticut fivesome drawing more jam-scene oxygen (and critical attention) than many of the scene’s bands will ever inhale in their entire careers — has been meteoric. They’re selling out bigger and bigger shows, getting the props for big-ball festival slots (like Bonnaroo earlier this month), experiencing a level of show-by-show scrutiny and analysis usually reserved only for Phish and maybe a few others, and making statement after statement of “for real,” not least behind their new album, Dripfield, an ambitious, accomplished collection that, rare for jam bands, moves their studio album and songwriting chops within range of their improvisational abilities.

As they landed at Radio City Music Hall on Friday for the first of two, yep, statement-maker shows comprising three (!) sets each, it actually felt like the anointment had already happened — of course Goose were ready for Radio City, had been for a while. Future dates at much bigger venues owned by the jam scene’s capos didn’t seem far-fetched for Goose in 2019 when they were suddenly buzzing like crazy; they seem eventual and even inevitable now.

But that’s getting ahead of ourselves. Goose blazed (honked?) into Radio City on Friday with typical energy and the buoying of an adoring crowd ready to blow it out with them. Their sets are propulsive and relentless, moving through highly rhythmic sequences flush with guitar- and keyboard-based improvisation most often led by guitarist Rick Mitarotonda or multi-instrumentalist Peter Anspach. Ten-, 15- 20-minute and longer excursions through their well-worked-over set-list staples are a nightly expectation, but the protraction has purpose — even in their more “out” jamming sequences, they seem to have a sense of where they want to arrive, and the energy pulses. The drums-and-percussion corps of drummer Ben Atkind, percussionist Jeff Arevalo and bassist Trevor Weekz rarely pauses, serving up jackhammering rock and roll, disco-funk, trance beats, prog, all of it forward-moving, somewhat antsy, sometimes jittery, helpfully avoiding the long holding patterns in vamp-space that hold back less-assured bands heavy on the jam.

But these Radio City gigs were “extra mustard” Goose shows, not least because of their length: three sets, overall stretching past midnight with an encore in the mix. On Friday, after acknowledging the heaviness of the day, the band got right to business, serving up an acoustic first set that had tender-folkie strains (“California Magic”), upbeat Paul Simonesque stripes, some inspired nodding in an early ’70s Dead direction (including “Jack-a-Roe” and the “Bird Song”-reminiscent exploration that ambled out of “This Old Sea”) and fully felt-through acoustic jam-out in the groovy “All I Need.”

In set two, the rock show began, and the band bookended with high-energy favorites, including the opening “Tumble” and its furiously chugging jam segment, and the closing “Pancakes,” whose light and airy tone belies its reputation as an electrifying Goose jam vehicle, and, here, included one of the night’s most intense progressions from Mitarotonda — a jangly guitar showcase that threw off sparks galore. The middle of the set also scored: After the pensive “Borne” came “The Whales,” a Dripfield highlight, which felt urgent, Kinksian-psychedelic-rock-y, chameleonic, and built to another soaring guitar solo. (Notably, the band did not perform any segues between songs, choosing to contain the exciting improv segments within the selections themselves.)

Set three drew from even more of the expanding Goose palette, including with guests (a move that would also come to pass in Saturday night’s epic, headline-worthy summit with Trey Anastasio and Father John Misty). Here, after a typically dramatic “Madhuvan,” the band brought up Stuart Bogie on sax, Dave Nelson on trombone, and D. James Goodwin — who produced Dripfield  — on guitar. The eight-piece went hard after Goose favorite “Hot Tea” — Radio City’s upper mezzanines were positively bouncing along to the song’s party-ready lilt — and then brought the set home with a gnarly “Arrow,” which whipsaws from boogie to slow burn and back again. In a playful, almost Phish-like turn, the band leaned more toward the sonics and feel of the studio versions of both of those set-list staples vs. the more familiar live arrangements Goose freaks know. That, too, worked. Most choices did, in fact, on a night when a hot young band showed up at a hallowed room to claim the mantle and owned it all weekend. —Chad Berndtson | @Cberndtson